BEST SELLER
4.75 out of 5 based on 4 customer ratings
| Write a review | Ask a Question

The Umbrella Academy is a fantasy /superhero web television series. It released its first season on Netflix on 15th February 2019. The series is based on the comic book series of the same name that was published by Dark Horse Comics and was developed by Jeremy Slater and created by Steve Blackman for Netflix. It is a successful series that was positively acclaimed by the critics as well as the audience. The story revolves around a dysfunctional family of adopted sibling superheroes, who have reunited to resolve the mystery of their father’s sudden death and the danger of an impending global apocalypse. The character of Klaus Hargreeves / The Séance /Number Three is portrayed by Robert Sheehan, who is an ostentatious drug addict, with the ability to communicate with the dead, temporarily making them real. Robert is looking cool in this Klaus Hargreeves The Umbrella Academy S02 Coat in the series. Now you have a chance to get the same jacket as he is wearing. So don’t wait; order your coat now.

This graceful men’s long coat is manufactured from excellent quality cotton blend material, with a soft viscose fabric lining inside. It is designed with a stand-up style collar, long sleeves with embroidered cuffs, and a front opening with fasteners. This stylish men’s cotton-blend long coat is available in white color and blue borders with silver-colored embroidery. 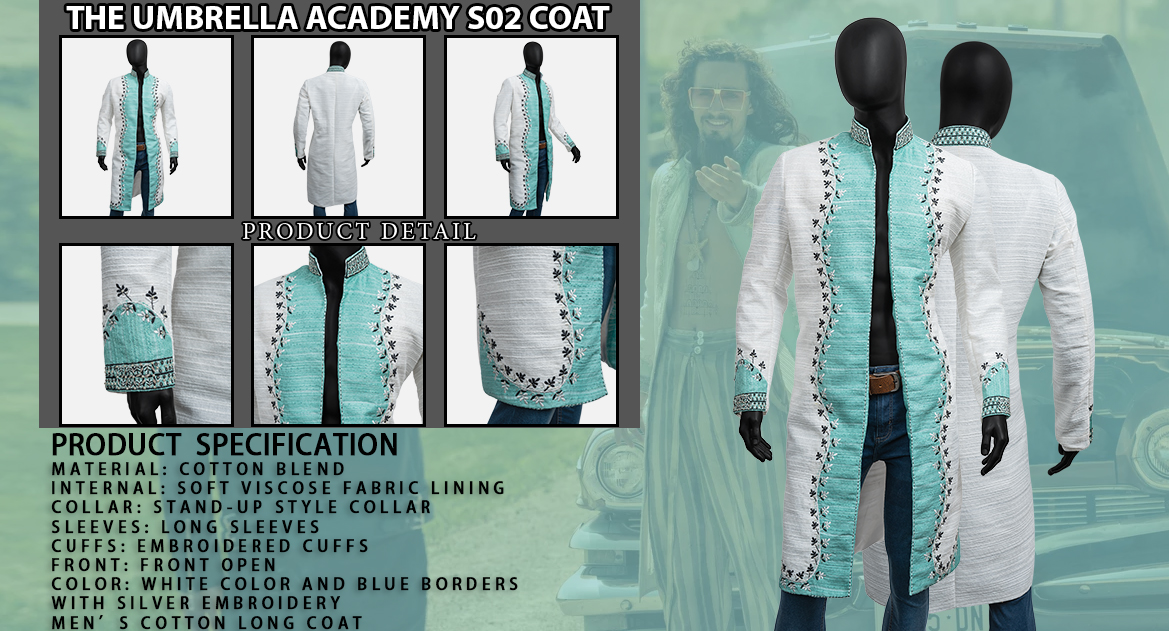 Questions & Answers (2)
Hi there, do you have any images of a finished project you have sent out to someone - just to get an idea of how close it looks like please?Back to product
asked by Sobia on 2020-08-12 18:26:50
1 answers shown
Scroll To Top